Too often, we are bound by the gridlock that is our society. We seek escape from the mundane & often totalitarian society we live in. Whether confined by our personal demons, bound by unnecessary laws, stifled in a civilization of conformity, or simply stuck in traffic, we seek sanctuary.
There are five interlocking grids in 'Escaping gridlock' & one jagged, bloodied, individual trying to escape.
Posted by A Wilson at 5:42 PM No comments:

Dedicated to Gene Roddenberry (1921 - 1991) as he & his wife Majel Barret Roddenberry (1932 - 2008) will go where no man has gone before aboard the Voyager Memorial Flight. Projected to occur in 2012, this space flight will carry portions of their remains on an infinite journey into deep space.


"In this galaxy, there's a mathematical probability
of three million earth type planets. And in all of
the universe three million galaxies just like this.
And in all of that, and perhaps more, only one of each of us."

I am disgusted with Missouri legislators overturning the vote of the people of Missouri and insulted by Representatives & Senators stating that voters "don't understand the issues at the ballot box".
Our legislators consistently disregard Missouri voters. For instance, state legislators began working to repeal the puppy mill law that was just approved by voters in November 2010, before the law even took effect and was given a chance to work. In 2003, the state legislature passed a concealed handgun law that the voters previously rejected. In 2009 they undid a school funding measure that passed as part of a casino initiative. The Missouri Legislature is now working to dismantle a 2006 ballot measure on minimum wage and a 2009 ballot measure on clean energy. If politicians can defy the will of the voters on these issues, then what other issues will be next?
It is time to stop the assault on Missouri Voters. This is a non-partisan issue. Whether you are Republican, Democrat, Liberal, Conservative, Tea Party or no party.... your vote should count.
There is currently a citizen's initiative to create a Missouri constitutional amendment to require a 3/4 majority to change laws voted on by the people of Missouri. Find out more & where you can sign the petition at: http://www.protectvoters.com/
Posted by A Wilson at 5:27 PM No comments: 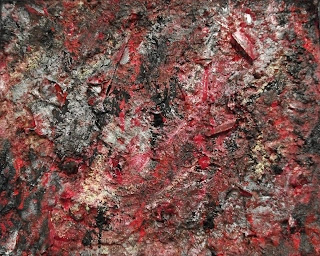 We all bury deep within us our fears that we do not show to the world around us. They are buried so deeply, underneath so many layers of our complex souls.
Embedded within this piece are the worst fears of almost 20 local artists along with my own worst fear. And as in our own lives, these fears are buried & will never to be revealed to anyone.
Posted by A Wilson at 4:56 PM No comments: 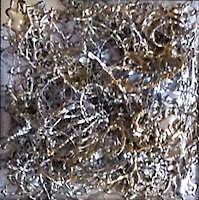 I believe that a single cognitive thought travels a long journey as it evolves. I've always envisioned the thought process inside the brain as chaos theory incarnate.

The customers who purchased Cognitive Thought were kind enough to share with me how wonderfully they have framed my creation. (See photo below).
The unframed size is 8"x8" and after framing it hangs at 24"x24".
I can't agree more with my customers comments regarding the piece, "it is spectacular and everyone comments about the unique beauty and complexity of the art. It really shows it off."  I'm thrilled that my artwork has found such a wonderful home for it to live. 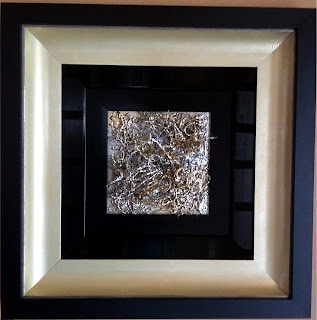 As an artist I create as I'm inspired and without inpiration, I cannot create. Usually thoughts of new work fester within me for days, weeks or months before the idea in mind my mind comes to full fruition. Then I can do nothing else but create until the piece is finished.  “Cognitive Thought” is very special to me, because it embodies how I view my own thought process. One single cognitive thought, I believe, travels a long journey in that space of a millisecond as it evolves. It's chaotic, yet fluid at the same time.  I'm so glad they are enjoying the Cognitive Thought and I'm so glad they shared their impressions with me. The Pancha Mahabuta Series is my personal interpetation of the hinduistic five elements.

The series consists of the following works:

The Pancha Mahabuta Series was one of personal favorites to create. Though I was raised in a Catholic home, I enjoy studying different religions & came across the ancient Hindu belief of the five elements: Akasha, Prithvi, Pavana, Jala, & Tejas.

Akasha, also known as the fifth element, is believed to be the source of the other four elements, giving 'birth' to the gods of Earth (Prithvi), Wind (Pavana), Water (Jala) & Fire (Tejas). In the creation of these pieces, I incorporated each of the elements into the paintings. Tejas was burnt with a torch, Pavana was created with the use of a fan to create the wind painting, Jala was painted using copious amounts of water, & Prithvi has soil incorporated into the paint. Akasha comes very close to my personal belief of an uncaused cause (or God). To me, Akasha is the reaction that had no action to cause it's being. Personally, Akasha is how I view what God looked like at the beginning of time. Some might call it the Big Bang. It is what you want it to be.
Posted by A Wilson at 2:26 PM No comments:

In this series, I wanted to explore Isaac Newton's Third Law of Motion, "To every action, there is an equal and opposite reaction". I am fascinated by science & the self revelations we realize thru discovery of our surroundings.

Newton's Third law is one I quote often as I believe not only does it apply to our physicality in this universe, but also to our humanity and spirituality